Lord of the Rings Interactive Army of the Dead Mod

This is currently unavailable

NOTE: This item only ships to continental USA due to being extra fragile

This is our own custom army of the dead mod for lord of the rings pinball. This mod contains 4 translucent ghost army figures which light up interactively with the game's path of the dead lights. Each of the 4 figures corresponds to one of the switches that needs to be hit to collect the army of the dead. Looks awesome with the game's light show especially when ring modes start.

This mod is a full plug and play kit and takes about 10 minutes to install. The mod attaches over the mini playfield in the game and hooks into the wiring harness behind the backboard that the 4 lights plug into.

See our photos and videos.

This mod now comes with a free green stern light strip to light up underneath the miniplayfield.

*Important Note: The figures are cast in such a way to allow light to fully illuminate each character in the cool glowing green you see in the pictures. The characters look fantastic when lit up in your game and work perfectly for this! When unlit and looking at them in your hand up close you will not see as fine of detail as you would from a mass produced model from a toy store, as those did not light up and glow as well. If you are expecting very detailed looking characters, you should probably look elsewhere. Remember you are several feet from the small characters when standing in the game play position. The original mod did not come with weapons because they are fragile and don't always survive shipping. The weapon are super glued on before mailed out and if one comes off you can simply glue it back on. Not all characters come with weapons. Remember the lord of the rings army of the dead had missing limbs, broken weapons in the movie. The mod is similar. 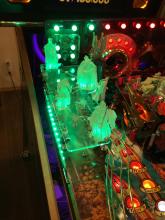 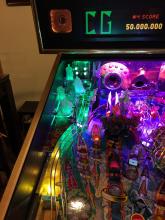 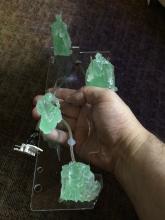 
This is a full and complete classic style LED kit for your Bally Mata Hari Pinball Machine. This... See All